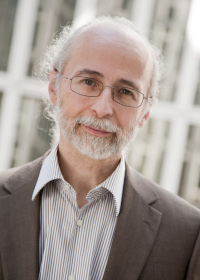 Consultation hours: on appointment made with the front office

Gustaf Neumann is native of Vienna, Austria. He graduated from the Vienna University of Economics and Business Administration in 1983 and holds a Ph.D. from the same university. He joined the faculty of WU in 1983 as Assistant Professor at the MIS department and served as head of the research group for Logic Programming and Intelligent Information Systems. Before becoming a full professor at the University of Essen, Gustaf Neumann was a visiting scientist at IBM's T.J. Watson Research Center in Yorktown Heights, NY, from 1985-1986 and 1993-1995 (working e.g. on the Syllog system).

In 1987 he was awarded the Heinz-Zemanek award of the Austrian Association of Computer Science (OCG) for best dissertation Metainterpreter Directed Compilation of Logic Programs into Prolog in the field of computer science. In 1988 he received the Senator Wilhelm Wilfling Price (research recognition) and in 2005 the WU Best Paper Award (highest valued price from universities for research publications). In 2007 and 2012, Gustaf Neumann received the Senator Wilhelm Wilfling Price again.

Professor Neumann has published books and papers in the areas of program transformation, data modeling, and information systems technology with a focus on e-learning applications. He is a founding member of the Virtual Global University where he is responsible for the course Advanced Web Engineering. Gustaf Neumann is the Program Director of the IS-Programs of WU.

He is/was the scientific lead heading of serveral EC IST research projects such as UNIVERSAL, Elena, iCAMP,  Prolix, ROLE and iCoper. He was member of the Steering Board of the Network of Excellence ProLearn and the knowledge broker EducaNext. Gustaf Neumann is as well heading the Learn@WU project, which is one of the most intensively used e-learning platforms worldwide. Recently, Gustaf Neumann was elected to the Board of Directors of the .LRN Consortium and to the OpenACS  core team and served so far 5 times as a mentor in Google's Summer of Code program. Gustaf Neumann serves as reviewer in many journals including CACM, DKE, Software Practice and Experience and many more) and as Associate Editor of Journals like e.g. BISE or conferences like e.g. WI 2013.

Gustaf Neumann is the author of several widely used open source software packages, such as the TeX-dvi converter dvi2xx (dvi2lj is part of practically every TeX installation), file:diac4.tar.gz  (a program to convert words with diacritical characters "ascii german" into iso-8859, i.e. replace "ae" etc into umlauts), the graphical frontend package Wafe, the Web-browser Cineast, the object oriented scripting language XOTcl, and the Next Scripting Framework . Gustaf Neumann is actively contributing to several larger open source software products such as OpenACS  ,  AOLserver  and NaviServer . On of the earliest public software development activities involved the development of Trickle in 1988 (together with Turgut Kalfaoğlu), which was a distributed storage system based on IBM mainframes in the BITNET/EARN network to provide European universities access to software archives in the early Internet (at the time, when the Internet was not available to most parts of Europe).  In 2010 he received the Tcl Community Service Award  from the Tcl Open Source Community. Gustaf Neumann is a Linux User since 1992 (Linux 0.96).


References to this Page: en:wafe